I had started piecing this variation on the Jack-in-the-Box box about 2008. The only thing I remember about my process at that time was that I was dedicated to making it out of only fabrics in my stash and whatever muslin I had lying around. For some inexplicable reason when I was about 30 minutes from finishing the top, I put it in a box.

Then the box got put in a closet and was promptly forgotten.

Fast forward to 2011, I was in the midst of cleaning and organizing and moving furniture around while we put in new flooring and I came across the unfinished top and several finished blocks. 30 minutes after finding them I finished the actual top while constantly remarking to every one for the next two weeks who would listen that I had left a project go for years when the end was in sight.

Over Christmas, while I was visiting my parents, I had the opportunity to throw it on my momma's long-arm machine and quilt it after finding the backing in my stash as well.

Lots of hours over several days later, I had 'pebbled' the quilt. 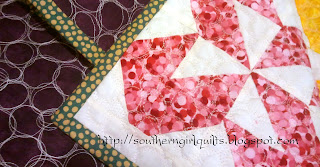 And linked up with Fabric Tuesday over at Quilt Story.