It's been a while since I pieced a quilt by hand or worked with hexagons so I started another quilt. However, instead of the traditional 'Grandma's Flower Garden' I decided to do something a little different with stars. But silly me couldn't figure out how to actually put the stars together on the fly, so I set down with my trusty software GIMP and laid it out (I know a first). This is only the general concept and probably won't look much like the final version but it gives me a reference point for joining the stars. 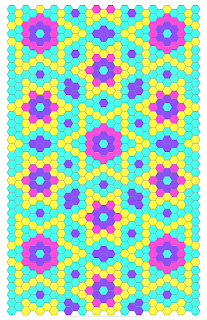